My main requirement was for a comfortable steel frame with some flexibility in the build, I knew I wanted to run largish 700c tyres, for a mix of trails and roads with lots of potholes. 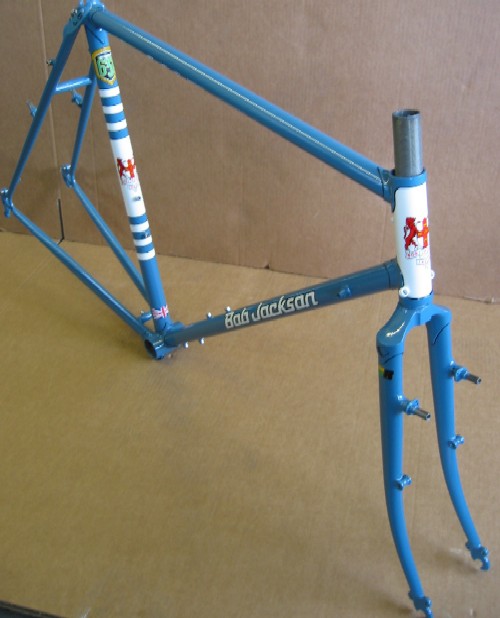 I liked the idea of a build by an experienced British frame builder and looked at several including Dave Yates, they were very helpful but reluctant to build a frame with capacity to take 30mm plus tyres. When I spoke to Donald at Bob Jackson, he immediately understood what I was after and following a quick trip to Leeds, the frame was ordered on 1st September.

The “World Tour” frame was an obvious choice, allowing for the widest tyres (up to 32C with mudguards) and with plenty of options for racks, bottles, etc. I decided on 135mm rear dropout, weight not really being an issue, it meant I could have a stronger wheel build and if necessary allow me to use wheels from my Cross Check if I wanted. Having decided on a fairly traditional style build, I chose a 1” threaded column so that I could use a quill stem. Bob Jackson offer some great options on paint and the trip was worthwhile if only to see examples of the options available. I have chosen Peppermint enamel (more durable than the flamboyant or metallic finishes, so I was advised), with a white headtube and white multi-panel Seat tube, finally I have chosen to have the lugs picked out in white paint.

The frame is due to arrive next week, I cannot praise the attention and service from Bob Jackson highly enough. They have been happy to advise on components and options over the last few weeks and have really taken a genuine interest when I have called.

Hello, wondering what the largest tire you've fitted to your Bob Jackson has been? Been looking at them as an alternative to the CrossCheck which is more popular here as I need a slightly shorter top tube length that the Bob Jackson has (and I love the lugs!) Thanks!

Hi Jon - I normally run 700x32c tyres (Schwalbe Marathon Supreme) with full mudguards, which is about the limit. If I was to remove the mudguards I could probably go to 40mm or so.

In the ice this year I was able to get 700x30c Spikes in (http://danmitch.typepad.com/a_bike_build/2013/01/spikes-schwalbe-winter-tyres.html).

The Bob Jackson World Tour is a great alternative to the Surly Cross Check, I had a CC until recently, also a great bike but sizing is a bit funny, I had to go with a smaller frame just for the top tube too as I have long legs and a short torso. The World Tour is perfect and a much more balanced fit.

Thanks for your contribution to the blog - Dan