Back to the Bob Jackson build. So with the World Tour frame ordered and wheelset in progress, the next choices were on the running gear. Shimano 105 was an easy choice for derailleurs, cassette and brifters. I really think it’s the best balance between value and quality, weight not really being an issue, they are durable and very easy to obtain at sensible prices. I wanted to stick with Shimano to maintain compatibility with my existing components and the Cross Check, so Campagnolo and SRAM were not really an option. The only real decision now was whether to run a medium or short cage rear mech - I have always been happy with compact double chainrings with a 12-27 cassette and don’t intend to carry heavy loads despite the Bob Jackson being a touring frame, so decided I didn’t need the flexibility of a triple crankset that would have dictated a medium cage. Although only minor advantages, the short cage gives a bit better ground clearance and looks neater. 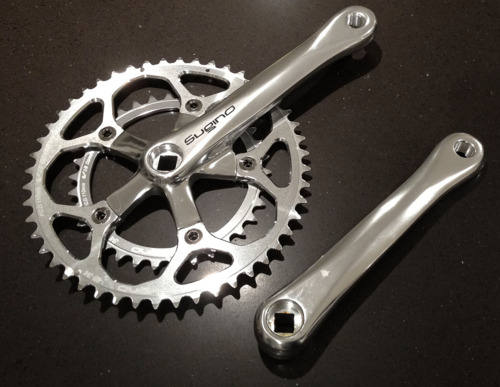 I don’t like the appearance of the 105 crankset and really wanted a more traditional looking crankset so had a look at Velo Orange. Their Grand Cru cranksets are very nice, but having seen some really nicely finished Sugino parts, I went for the Sugino Alpina crankset, really just on appearance as I am sure quality on both is very high. It has 48/34 chainrings so will be similar gearing to the 50/34 FSA chainrings I am used to - I won’t miss the little bit extra at the top. The bottom bracket (VO Grand Cru 113mm English thread 68mm) and Sugino dust caps (little bits of plastic) were added to the order.

They took a couple of weeks to arrive and clear customs, but I was beginning to learn patience for the first time by this point!