« The Nickey Line | Main | Tyres on the Surly Cross Check »

So it is mucky, muddy weather and despite avoiding mudguards previously,I ordered a pair of Gilles Berthoud fenders, they were delivered within a few days and arrived well packed in French newspaper, (I nearly threw out the small bag of fittings), and with a catalogue but no instructions. However fitting was straightforward and took about an hour or so.

The rear mudguard is predrilled for the chainstay bridge and the fitting struts, my Bob Jackson World Tour already has drilled chainstay and seatstay bridges (vertically for mudguard rather than horizontally for brake fitting) which meant that I just needed to drill a 5mm hole in the position for the seatstay bridge - the stainless steel is quite slippery to drill, so I suggest drilling a small pilot hole from inside to out before then drilling the 5mm hole from outside in. I bought 40mm mudguards which needed just a slight squeeze to fit in between the chainstays while still providing adequate clearance for 700x32c tyres. I used 7 or 8 washers to space out the mudguard from the chainstay bridge (circled in red). Because the bike has horizontal rear dropouts, the tyre now has to be deflated before fitting or removing - not a big issue given that I would only ever be taking it off in the event of a flat anyway. This could probably be avoided if I didn’t space the fitting to the chainstay bridge, but wouldn’t have looked so neat. 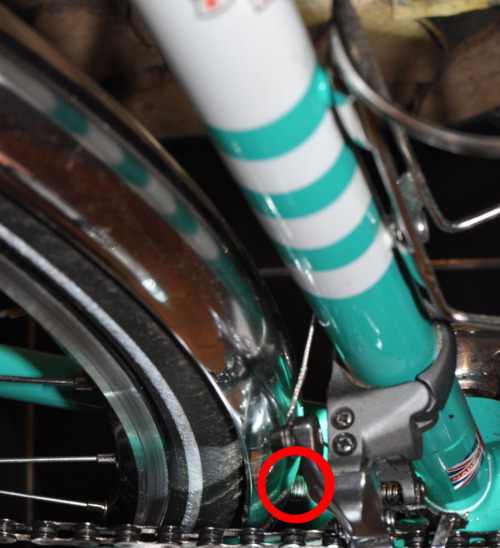 I ordered the “short” version of the front mudguard as I have no intention of fitting a handlebar bag. Again fitting was fairly straightforward because of compatibility with the World Tour build. The front mudguard mounts to the forks using a fitting held from a bolt screwed through the brake mount in the fork crown, it sounds complex but results in a really neat fit - this is only suitable for a 1” column though. 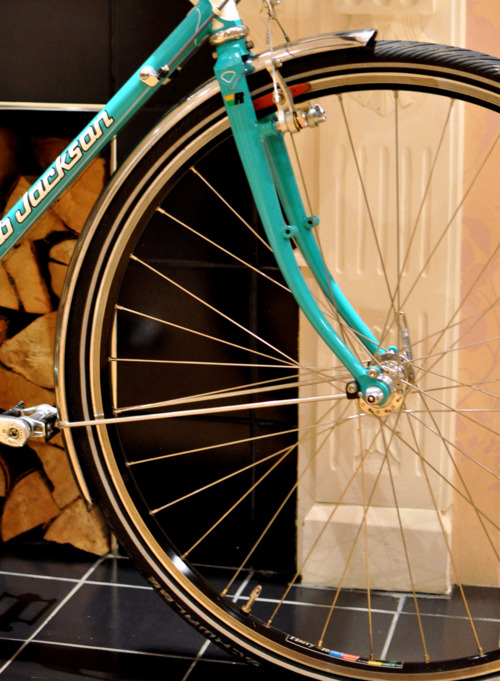 I wasn’t too worried about the stripe up my back, the main reason for fitting the mudguards was to try to keep the drivetrain a bit cleaner and the difference is really noticeable and riding in the wet is definitely more pleasant.

Thanks for giving so much information about this frame, I would like to get one but I have a number of doubts that are deal breakers and I wouldn't like to rush my purchase.

In my current bike i'm running 35mm fenders, but I think they do not offer adequate coverage for 28mm tyres. I wonder what your impression is in running these 40mm fenders with 32mm tyres. Ideally I would like to get some velo orange fenders, 45 mm, but after reading your post i'm afraid that it might be difficult to fit them.

Glad you have found the articles useful. I have found different mudguards provide different quality of coverage. The Gilles Berthoud mudguards have rolled edges which channels water away really well so even in mucky wet conditions they are very effective on my Bob Jackson.

As you have said, I run 32c Marathon Supremes with 40mm fenders and even if I had clearance for 45mm, I would stick with 40mm. It helps to have them installed fairly close to the tyres, as you will see from the pictures. I would also strongly advise a mudflap which is really helpful in keeping the running gear and your feet from getting water and muck thrown over them. 40mm fenders are the largest I could fit into my 23" frame.

Hope this helps, feel free to post if you have any other questions.

Thank you very much for your answer, and sorry for taking so much time to answer.

I still haven't decided which size to get, i'm fairly short, but I tend to find larger bikes more comfortable. It would be something around 20" so choosing the 40mm Berthouds over the 45mm Velo Oranges might be my best bet.

If I finally end up ordering the frame it will come up as a very similar bike, as i'm also plan to get Paul brakes.

Sizing is a science itself! There are a number of good calculators available online that give you a good starting point but it is well worth getting a fit done if you are in doubt. I would look at the online calculator on the Competitive Cyclist site - http://www.competitivecyclist.com/Store/catalog/fitCalculatorBike.jsp - different frame geometries and points of measurements can change the stated frame size you need, my Bob Jackson for example is a 23" (58.4cm) and my Condor Acciaio is a 55cm. In my opinion, by far the most important measurement is the top tube.