I built up Debbie's Surly Cross Check in March last year with drop bars, but due to neck and back problems, a rebuild was needed for a more upright and comfy ride.

The choice of bars was the biggest decision and I ended up choosing Nitto North Road bars. Other possibilities included Albatross bars which are very similar and Moustache bars, which I think would have lacked the comfort for city commuting. 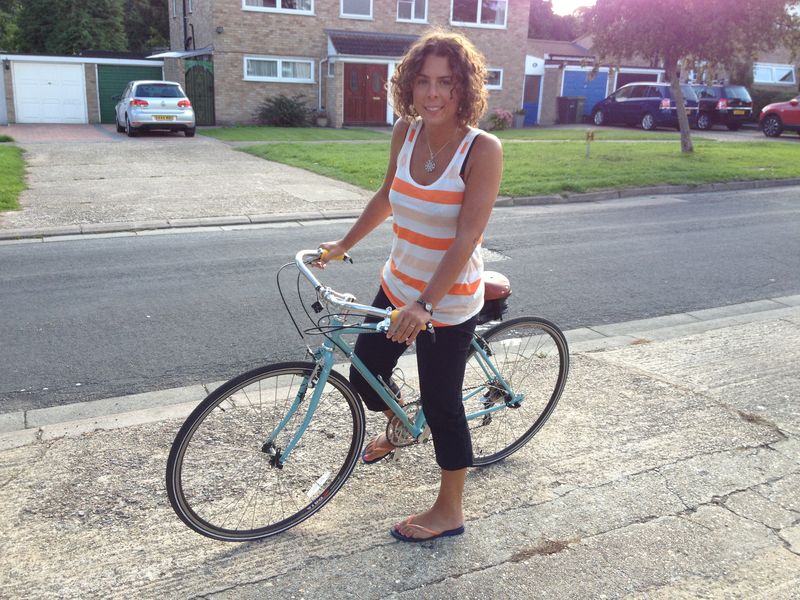 So that I could keep the same Velo Orange stem, a shim was needed as the bar diameter for the North Road bars is 25.4mm compared to 26mm on the Deda drop bars fitted previously, Nitto make one specifically for the purpose. Brake levers and shifters were needed to replace the Shimano 105 STIs, for brakes I went with Tektro FL750s in silver, they are really nicely made and well finished - unlike most flat bar levers they take road cables - take note! Dia Compe 131 levers would make a good alternative. Shifters were a choice between bar end or down tube, ultimately I think bar end will prove to be more convenient and I fitted Shimano Dura-Ace 10 speed shifters, they are a bit pricey but of excellent quality.

I have seen North Road bars with standard grips and bar tape, both would have worked, but bar tape seemed more practical and allowed the shift cables to be routed neatly under the tape. For the moment it is standard Deda cork tape but I will replace it with some Brooks leather tape to complement the saddle at some point.

The whole conversion cost about £150, which is not too bad considering all the components were pretty high-end. The verdict from Debbie is definately positive so far, on a couple of short test rides she has found the bike really comfortable and probably better suited for commuting in traffic due to the improved visibility from a more upright position. More proof that the Surly Cross Check is such a versatile bike, it really is well suited to a traditional "city commuter" build, now I just have to pursuade her to accept mudguards!

Glad to see things are working out for the Crosscheck. I've been looking at the frame for a couple of years, actually a few (3). The first time I got a chance to see one in person was at Brixton Cycles. I went there specifically to see it when I was in London a few years back.

Last night the local representative in Sweden lowered the price on a frame they had in stock that was my size. They usually don't keep stock on hand, so I guess someone backed out of a purchase or something. Anyway ... I bought it. Now I know where the first part of my winter will be spent, in the garage.

I really value your opinion on city commuting. You have reflected my own opinion perfectly!